Migrating Microsoft Windows applications to the cloud is often a frustrating and expensive process. The failure and rollback rates for these projects is far higher than most people realize. There are various factors that make Windows application migrations particularly error prone: key hosting platform differences, legacy application architecture, antiquated security infrastructure, and a lack of automation-centric operations experience. Many Windows applications were written before the cloud era and make flawed assumptions about the stability and durability of the underlying infrastructure. These design assumptions are almost invariably inconsistent with best current practices around cloud-native architecture and infrastructure operations.

Microsoft Windows IaaS workloads tend to be the most incorrectly deployed and operated cloud computing workloads. Historically, Windows ecosystem users did not have heavy scripting and automation backgrounds—most deployments are one-offs, with no clear record of the system state or changes made over time. And most of the time, these deployments tend to be very long running, with patches and manual maintenance rather than frequent refreshes via redeployment. These operational practices are completely at odds with the core principles of cloud architecture and operation, and often lead to the type of catastrophic security issues that have plagued the Windows ecosystem in years past.

Correctly migrating yesterday’s app to today’s cloud platform is rarely as simple as “lift and shift and tinker” VM conversion—despite what those with a financial motive may publicize, this is almost always the wrong thing to do. When migrating Microsoft workloads into the cloud, companies need to make sure those workloads maintain functionality, consistency, and security. The vast majority—perhaps as many as 90%—of these workload migrations are done incorrectly or, at a minimum, in a non-repeatable fashion that creates and perpetuates technical debt. One-off manual redeployments, “lift and shift” VM conversions, overprovisioned cloud resources, and a lack of per-application security are among the most common problems that Cascadeo encounters in client cloud migration initiatives. It is almost never the case that importing yesterday’s virtual machines is the right way to move Windows applications to the cloud.

The challenge becomes migrating without duplicating these legacy issues in the cloud. How do we quickly and painlessly deploy Microsoft workloads to Amazon Web Services (AWS) in a repeatable, consistent, reliable, and highly functional way? This challenge is particularly problematic with legacy Windows applications, many of which assume a shared file system mounted read/write to each application server. This legacy architecture is problematic for a number of reasons, the least of which is the scalability, security, cost, and blast radius concerns associated with any sort of networked file system. 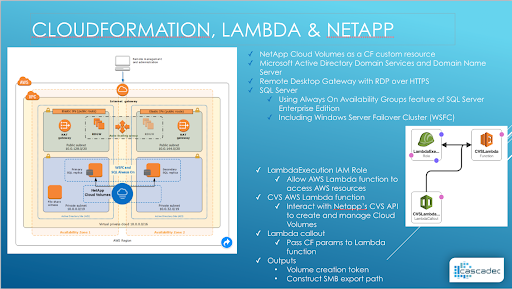 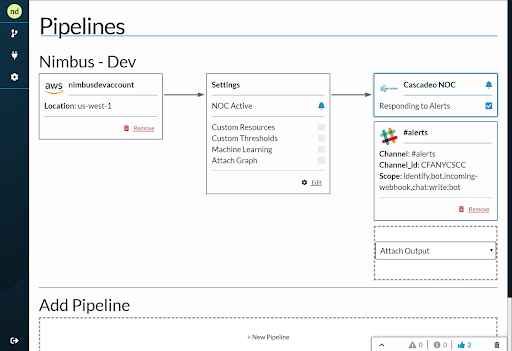 With NetApp operationally responsible for durable, high-performance cloud filestorage, Cascadeo steps in to support 24×7 managed operations for the infrastructure and application workload via the cascadeo.io platform for cloud managed services.  Unlike other managed services providers, Cascadeo doesn’t replace your tools, infrastructure, or monitoring framework. Instead, the approach is to stream operationaldata into Cascadeo’s SaaS Analytics backend and provide support built on whatever tools clients already have.  For those lacking modern IT telemetry infrastructure, Cascadeo deploys tools automatically via Terraform-driven automation.  This reduces the time to full MSP operations from weeks to minutes, and reduces the client’s deployment expense to a tiny fraction of what a professional services engagement would require.  Cascadeo can literally deploy a complete, production-ready Windows + NetApp implementation on AWS with live managed services support the same day a client requests it; other AWS Premier Consulting partners often take 60-90 days to deploy and operationalize a similar solution.   It is because of Cascadeo’s extensive experience in infrastructure automation, extreme-scale time-series data analysis, and numerous past cloud architecture engagements that the company was able to develop the cascadeo.io platform.

Cascadeo is an AWS Premier Consulting Partner and Managed Services Provider based in Seattle, WA, USA with a secondary headquarters in metro Manila, Philippines. The 13-year-old company has worked with well over a hundred enterprise clients across the United States, Europe, and APAC regions to successfully design and deploy solutions to public cloud environments. As a cloud-first partner to NetApp, Cascadeo recommends and implements solutions from a variety of vendors, but is not a VAR or reseller, and focuses exclusively on finding the right products for a given customer engagement. Put differently, Cascadeo is less concerned with selling products and more concerned with solving clients’ problems correctly and efficiently, setting them up for long-term success rather than focusing on near-term revenue or platform adoption.

Together, NetApp and Cascadeo keep your files and Windows applications connected, accessible, monitored, and competently operated in the cloud.

To learn more about how NetApp and Cascadeo migrate workloads into AWS, check out the following demonstration.